Shenmue I & II Confirmed for PC/PS4/Xbox One 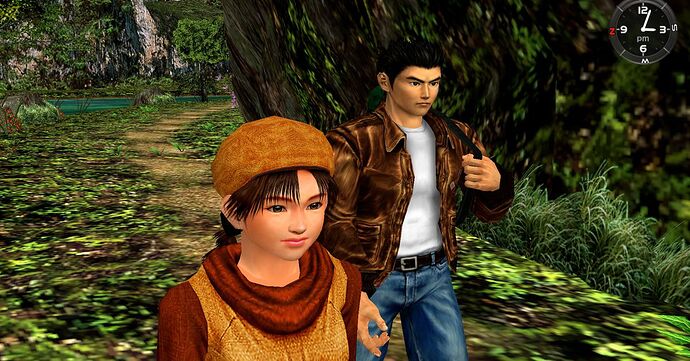 Shenmue and Shenmue 2 coming to PS4, Xbox One and PC

No date yet but I assume this will release a little bit before ShenMue3 (when they have the final release date).
I want to play this in the order, since I never played them before.
How long are the games? I guess one month or two would be nice before ShenMue3 comes out.

They’re fairly long, maybe 20 to 30 hours each, and dialogue heavy. I would allow some time to complete them before moving on to Shenmue III. I don’t think it matters if we don’t play Shenmue III straight away because we’re still playing the remaster of Shenmue I & II; the wait has been so long already, what’s a little longer?

I am super excited for this. Hopefully it comes out well enough in advance of Shenmue III.

However, the big question is, should I play with English voices or Japanese voices, now I’ll have the choice!?

Is Shenmue III going to be translated into English? If not it might be better to play all three in Japanese with English subtitles so that it’s not as jarring switching language part way through the story.

It is going to be in English, with the original voice actors

It is going to be in English, with the original voice actors

This is really great news.

Has what’s left of the Sega community gathered anywhere other than the official site?

http://www.shenmuedojo.net is the place that I’ve been visiting for years (although I don’t use the forums). I remember the dark days of nipping in quickly to see if there was any announcement of Shenmue III…

It’s good to see you still here, Shadow. I’m a very different person these days. I wanted to feel like I was a part of something if you know what I mean. I’m glad we will finally see Shenmue 3. Shenmue 2 would have sold way more if the Dreamcast had lived a little longer in my opinion. Make sure you enjoy yourself.

The pre-order page is up on Steam. Shenmue I & II is being released on August 21. Sooner than I thought.

Damn, it’s hard for someone who has never played this series to be hyped for this in 2018 when I see this trailer.
Please don’t be offended guys… Yet I want to try it because of its legend but I think I will wait and see and not pre order.

No offence taken. Even back in the Dreamcast era, the Shenmue games weren’t without their flaws. But they were pioneers of a number of cinematic game elements that are now commonplace in modern story based games. So, if you play them, it’s probably best to come at it from an “observer of gaming history” viewpoint (and to understand the story of Shenmue III).

It’s unfortunate that the Steam version comes with Denuvo DRM. I think I’ll get the PS4 version to avoid the hassles that came with running Sonic Mania on PC.

So. Pumped. I’ll finally get to play Shenmue II with English voice overs! I’m also going PS4, as that’ll be my S3 platform and I highly doubt saves will cross over but you never know!

In theory it shouldn’t be too hard to make the saves carry over, assuming that it’s just items and stats. They could always add an event at the start of Shenmue III where Ryo gets mugged of a bunch of his collectable toys if they’re not all included in the third instalment.

Damn, it’s hard for someone who has never played this series to be hyped for this in 2018 when I see this trailer.
Please don’t be offended guys… Yet I want to try it because of its legend but I think I will wait and see and not pre order.

If you are new to the games I would start with Shenmue 2. It really was a great game. The original was too slow for me.

But I thought I HAD to start with the first one ?

You can watch “Shenmue: The Movie” which is a 90 minute film made up of cut scenes from the first game. It came bundled with Shenmue II on Xbox (on a regular DVD) since the first game was a Dreamcast exclusive.

You appreciate the second one so much more after playing the first one. I would just play both.

There is a rumor this could come on Switch. I mean it’s not like the PS4 Pro or PC version has been enhanced that much anyway, the convenience of portability would appeal so much to me for these games.

But I thought I HAD to start with the first one ?