And to celebrate, Polygon wrote a massive article about Team Andromeda with 13 of the original members’ insights on various aspects of the game series’ development process and a little bit of hope for a future installment of the series.

I was just about to post this!
The artwork renders on that page are amazing! @Solo_Wing - you think you’ll be able to use your influence to grab the full resolution versions? I’d love to make an art print

It was very interesting to hear that aside from PD, PDZ and PDS, there was a fourth game in development that was more “cute”! I wonder what it was and what it looked like?

Also, it was intriguing to read the various interpretations of the ending to Saga by the developers. Almost all of them can agree that Edge definitely dies without the “Player” or the “Divine Visitor’s” control. As he was shot and killed in the very beginning of the game.

And one developer even said that Orta could be a sort of alternate story that takes place in an alternate timeline! (I guess that sort of explains everyone’s feelings that Orta sort of felt like a fan fiction lol!) Even the developers feel the same way!

And one developer even said that Orta could be a sort of alternate story that takes place in an alternate timeline! (I guess that sort of explains everyone’s feelings that Orta sort of felt like a fan fiction lol!) Even the developers feel the same way!

I thought Futatsugi already said that?

Btw, a great article (a few copy/past mistakes in the text I think). Probably the first time we have such a collective look back on PDS by ex Team Andromeda members?

I’ve DMed James with a few questions, and mentioned the renders @Scott, hopefully he will have time to get back to me. The art in that article is indeed great.

Regarding Orta being an alternative story, there’s an interesting discussion that I started a while back about whether that game’s events should be considered part of the canon. If ever a Panzer Dragoon Saga sequel came out that ignored the events of Orta, I don’t see why Orta couldn’t be regarded as a seperate timeline (using Sestren being outside of time and space to explain this, of course). I think some of these developers are mis-remembering the events of Orta though (unless it’s different in the Japanese version - can anyone confirm?) because Orta being born of Edge’s DNA does not require that Edge was alive.

Looking at that sketch that Katsumi Yokota drew, do you think Azel’s hair starts to become sort of solid as it goes down? It seems like her hair is free flowing at first, but once it turns into a cone it sort of looks like it becomes hard…

I think some of these developers are mis-remembering the events of Orta though (unless it’s different in the Japanese version - can anyone confirm?) because Orta being born of Edge’s DNA does not require that Edge was alive.

After taking a look at the Japanese version, I don’t immediately notice a difference in terms of Orta’s backstory. So there’s no reason it has to be an alternative storyline where Edge lived. As Akihiko Mukaiyama noted, the narrator is different in the localization version. In the Japanese version, it’s actually the dragon itself who’s talking to the player.

After taking a look at the Japanese version, I don’t immediately notice a difference in terms of Orta’s backstory.

In the English version, Azel says “at the end of my fruitless searches” and Abadd says “the human’s gene data within Sestren”. Do the words in bold have the same meaning, because they are, I think, key.

“I think it’s OK for different people to have different interpretations, even among the development team members. And in fact, I prefer that it remains that way.”

I love this quote, it’s one of the key things that drew me to the world the series takes place in. A lot of things are underexplained and their creators haven’t even established what a lot of things could possibly mean. It’s like crafting a great piece of art and giving a big blank spot for players to stick their own mark on and draw unique significance from. In a way, I feel like it promotes a more personal connection to the series.

Yup, that’s how they wanted SAGA to end, with some mystery.
And I’m pretty sure Futatsugi said it in an interview that the story in Orta was an interpretation of the events.
To me, it never felt quite right, hence non canon in my mind.
It sounds to me like they are trying to find a way to reconcile they different point of view. Something that might have annoyed them to even consider the ‘future’ of the Panzer series as it was. SO I’m glad they seem at peace with this current version of the events.

But anyway, it’s cool to see them discuss the games in this level of details. I think the inception is working, they are having good memories (some painful ones too), and they seem to have some ideas growing for a potential remake or new entry.
It’s pretty funny that some of the things Futatsugi says now are some of the things that were put in the “5 reasons …” like walking on foot, open world…

Now, the open world formula ‘can’ work. But it’s not necessarily the only option.
What surprises me a bit is that Futatsugi would make the story secondary?

A game like God of War 2018 has an interesting structure, it is not exactly open world but it definitely feels more opened than the usual old school linear games.
Maybe a remake of Saga could interconnect the different areas better than the original (ie better than a map traveling system) with some places bigger and retaining this linear structure in the story main events.

But this is great to hear them express positive things for the potential future of the series.
Futatsugi also says there would need a push at a high level. I believe we fans can also help on this.
As said, I have sent a message to Haruki Satomi directly when I discovered he spoke English. We shall see. I have also sent another message in a bottle to a different person. We shall see.
And we need to keep showing we are here on social networks.

What surprises me a bit is that Futatsugi would make the story secondary?

Futatsugi used the example of a game like Journey, in that game the story was there, but it was more abstract. They kind of went there in Saga with the concept of the Divine Visitor, and how it was your journey - but for the most part it seemed like Edge’s story. So I can imagine a Panzer Dragoon game that is more about travelling through the world and exploring the ruins left behind, with the story and purpose of the quest being less explicit than in Saga and more about the journey of the dragon and the rider (you) and interactions between them. Imagine a Panzer Dragoon game where you could always see the Tower visibly in the distance (like the mountain in Journey), with the dragon guiding you there, with the player questioning why the dragon wants to go back there. Or travelling through a ruined city, with the visuals and use of space hinting at the story of a civilisation long past. Imagine the questions (and many interpretations) you could raise in the player’s mind without the need for dialogue.

I want to be surprised so why not, if they have a concept, they have to go ahead.
But in most games, when the dragon appeared, there was usually a reason. It never was a mount at your disposal like a simple horse. Except for Zwei maybe. So there would need to be at least a narrative explanation for having the dragon with you, it never was one of your possessions.

I’d argue that even in Zwei there was a reason. Lundi spared the mutant coolia and raised it in secret. It just so happened that it was the dragon.

The article has been updated. A section was missing, that’s the one about cut scenes, titled “BOOKENDS”

I think the unresolved storyline is more about Japanese culture than being about the art of story. Living there you see that many of their famous stories, movies, etc. really have no ending or resolution. I guess that is why I am not as attracted to Japanese games and movies. I am too American. I like a cleaner ending. I guess that is why I have a stronger affinity to Orta than a lot of you here as it somewhat answered questions I had regarding the ending of Saga. That isn’t to say that the Japanese can’t tell a good story as I obviously love the Panzer World, but I definitely prefer the western style of storytelling.

If you want to vote guys, feel free to join.
Poll opened for 7 days. 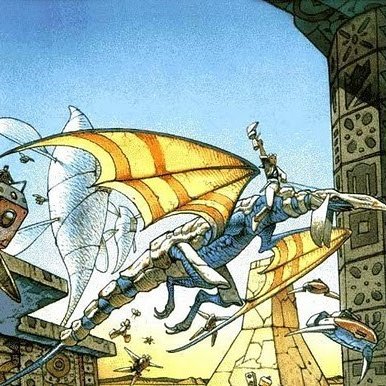 Ladies & Gents, You read in the latest Panzer Dragoon article by @jamesmielke , on @Polygon that the creators of PD have ideas for a remake or new game in the series. Their concept could mature. QUESTION: Would you crowdfund the game? #SavePanzerDragoon
GehnTheBerserker May 4, 2018, 11:11am #17

A few days ago I had a hunch/feeling we’d definately get a new PD game bu Futatsugi and Co in the future. Call it tapping into the Sestren future potentials timestream if you will

This article makes me so happy. I know most of you are a bunch of cynical “realistic” sourpusses who never get excited for anything (you gotta let some positive momentum roll baby! people with no passion and belief do not series help rebirth!)…I’ve only just started reading the article and will chime in later with more thoughts…

…but like I said previously, I feel Mielke would be instrumental in being a sort of liaison between the original team members and the rest of the gaming world…I wasn’t aware he still wrote for gaming sites…and I could see him making a potential (likely imo) crowdfunding effort much more noticeable in gaming websites and mags (I’m sure he has many contacts in gaming journalism)…which tend to have a bit of sway in terms of what people do or do not pay attention to.

This crowdfunding needs to happen. How many much more shittier series than PD got ressurected from the dead via crowdfunding? If this doesn’t happen I’m blaming everyone posting here for not recognizing how simple and arbitrary it is what sort of games do or do not get funded these days…and for not understanding most of these shitty series have only a handful of people who believed in the project in the first place. This may seem like it’s still the era of big corporations and huge studios…but really the doors have been open for everyone to chime in via the internet. As long as there are people want to play a game…that game is made. And there are more than enough people wanting to play PD. So get your mind right!! And get some enthusiasm going.

PS: Hell, bring Yoshitaka Azuma to colaborate with Kobayashi for the soundtrack!

PS: Hell, bring Yoshitaka Azuma to colaborate with Kobayashi for the soundtrack!

I love your energy. I hope I have some of the same energy as you for the campaign

Sadly he passed away.

Hopefully something happens after they’re done with The Good Life.

Pftt…that was why meditation was invented. You get a great musician (maybe Kobayashi) silence your mind…ask kindly…tune into his soul…and channel Azuma! How do you think guys like Daniel Day Lewis play Lincoln and stuff like that? It’s all in the ethers ma friend! Sestrenspace logs EVERYTHING!!

Lavoisire said it best " nothing is lost, nothing is created, everything is transformed."