Will be some good competition for the Switch at least. But I would assume the battery life is extremely low for high end games.

It sounds incredibly neat - some people already pay a premium to have a gaming laptop for the mobility so I could see this being appealing.

I have a few initial queries. Is it going to be comfortable? The button position seems very strange and mainly so they could fit a touch pad below the right thumb stick. Obviously I’ve not held it so I don’t know but the photos/videos make it look a little awkward.

Why are they pulling an Apple, offering a tiny storage option (64GB)? Some Steam games are 100-200GB. It’s nice to have the option but it feels like they’re doing that just to be able to say “available from X price!”.

At the very least Valve seems poised to support the Deck. Their track history for devices had lowered my confidence in them prior to this.

It looks like a better GPD Win/AyaNeo/OneXPlayer so it’s a very attractive portable PC to run older, indie and otherwise lower requirement (and even some current AAA stuff at reduced settings) games on in bed, on the sofa, while traveling, etc., as well as for emulation purposes up to a point. As long as people also understand it’s still a PC as Valve keeps stressing (and partnered with IGN for the reveal to avoid exactly that sort of SWITCH KILLER HANDHELD CONSOLE messaging the media did with the Steam machines previously, leading to all this disingenuous failure to kill consoles talk when for anyone who bought them for what they were, prebuilt small case PCs, they worked just fine until they upgraded or got a new one from any other brand) and don’t expect it to be console like and run every new Steam game optimally tuned to its own specs for 5-10 years but rather understand the performance ballpark the specs indicate and that they’ll still need to fiddle with settings and eventually games it can’t pleasantly handle even at reduced settings as the specs, to keep the tiny form factor, are rather modest for gaming when considered outside that aspect (ie, 4 core CPU). I’d probably get one if I had all the money (hitting that $400 sweet spot price point is the reason for the existence of the 64GB option btw) but it’s better spent on my eventual desktop upgrade. The software side of it is also pretty interesting as it will hopefully also translate in an improved Big Picture experience (and even better Linux gaming experience) for every other Steam/PC user too. 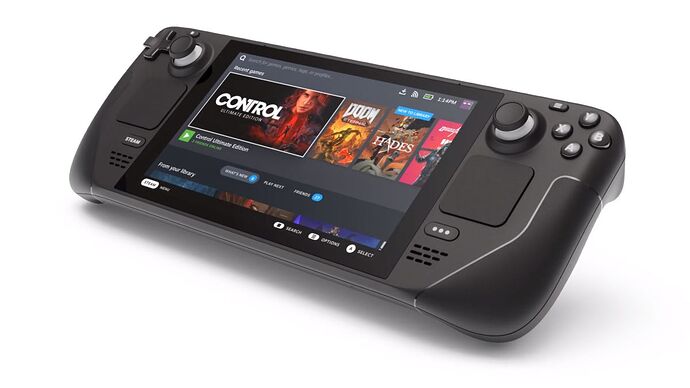 The Steam Deck’s GPU should do at least 30 fps at 720p on almost any title.

Don’t buy the base model whatever you do. Here is why. Not enough space and games will run like shit! Looks quite nice to me.

It won’t be nice if you want to play any open world games. It will be lagging and slow as hell. Taking into consideration everything the low end model lacks, it might not be worth it. Or rather it might be best to at least save up more money to buy the model above the base one.

Why’s that? Because the joke that is Review Tech told you?

Well first of all the base model only has 64GB of storage and the OS takes up 8GB after that you’re left with 56GB of storage. So for example a AAA game like Red Dead Redemption 2 takes up 120GB of space. So unless you buy an extra microSD card you just won’t be able to play any games over 56GB.

But putting your games on an SD card will also potentially slow them down along with the eMMC storage the base model uses. For example eMMC storage is limited to around 400MB/s, which is slower than a SATA SSD which can reach up to 500MB/s. And eMMC, which is basically an integrated SD card in terms of speed, is pretty weak compared to the 256/512GB NVME chips that can be found in the better Steam Deck models.

So if people are okay with decreased performance that’s fine but the base model might not play all high end games efficiently.

The system is more than capable of running Open world games. If the Switch or Base Xbox can do them, this system can handle them with ease. I think most people know that any mobile system is by its very nature going to have decreased performance

I hope it can. People are going to be running some tests so we’ll see how the base model does performance wise and see if there is a major difference.

I know you can install windows, but would love to keep the native UX experience as they seem to work better / more supported

would it be possible to install emulators on it natively, or would you have to more install your own OS?

The Deck specs outclass the Base XBox and PS4 never mind the Switch and they can all run open world games and the base consoles don’t even have SSD either.

I would imagine it can run any game at 30FPS in 720P with not many issue’s. That sad I rather play on a console but the price point seems very decent so sparked a little interest

We need to se how the games run off of an inserted SD card though. If that doesn’t hinder performance then that’s great.

As @Lagi_Webmaster mentioned, it’s preferable to use the SteamOS based UI. So, a lot hinges on how reliable the compatibility layer is. While it may be possible to install Windows, this isn’t going to be the best experience from a UX perspective because the Windows UI isn’t optimised for a device of this nature.

@Al3xand3r makes a good point - if you’re going to invest in the PC ecosystem, it may be wiser to put that money towards a better desktop rig, one that is going to be more future proofed for the ninth generation of gaming. That said, if you’re mainly looking to play eighth generation and earlier games, the Steam Deck may be a solid purchase. The PC has a massive back catalogue which dwarfs the backward compatibility offered by Xbox and PlayStation. Another option would be to buy a Steam Deck for older/indie games, while getting a Series X/PS5 for more demanding titles. This may work out to be a similar price point as a gaming desktop PC.

I’ve owned a few handhelds over the years, but I’ve always found that the portable gaming aspect is underused. When I’m travelling, a handheld system is another device to carry that competes with all of the various other portable entertainment we have now, and the Steam Deck is bulkier than a Switch or tablet. And is it the best time to launch a portable system, during Covid where people are travelling less? That said, it is appealing to continue playing from the same games library, rather than re-purchasing games that are already in my Steam library on the Switch or a mobile device.

The biggest worry to me is how long does the battery last? I don’t if they made a statement on that yet.