I don’t know how true this is, what sources stated this, but If what this youtuber says is true there is going to be a new cut of the Star Wars Sequel Trilogy. Much like the new Snyder cut of Justice League. Apparently finished for 2023. With scenes put back in and the story and characters completely changed. I frankly think this trilogy should be wiped from canon and they should start over. It’s like putting whip cream on a turd. It can’t be fixed!

I don’t know… If this is true they’re basically admitting they messed up royally, which companies aren’t too keen to do generally. I have to say the sequel trilogy didn’t live up to my expectations, but neither did the prequel trilogy and really it was always an impossible task to make more Star Wars films on par with the originals.

Yeah, but at least the prequels followed a main plan for the story and didn’t just make bits and pieces up with each new director. You could argue this was done for the originals but at least Lucas made it into a coherent story.

It this is true maybe I’ll be able to stomach watching them. Even though I can’t stand these characters now, because of what’s been done to them…

I think too there is just too much to redo, like many of the secondary characters just dont have an arc that can be fixed with a re-edit (like Finn) . Like Finn’s latent jedi ability should have meant something story wise, but didnt

It is possible if the re-edit alluded to the Emperor in the first 2 movies more, like Snoke talking to a shadowy dark master, it would at least help tie up and give some coherence to an endgoal earlier on

but it still just seems like they really had no idea how they wanted them to work and what story they wanted to tell, and are then surprised fans generally found them missing a reason to exist

In hindsight, it is so weird Star Wars Universe has its Robert Downey Jr actor; It is Mark Hamill, and how strange the series wasnt about him more (with new characters), and he could have been around for all 3, and died in the last one, instead of just staring in 1 of the 3

I’m still recovering from the scar that this sequel trilogy left on me. When I see a Star Wars game, I choose not to play it. When I think of re-watching the old movies I decide not to. I just can’t believe the mess Disney has put this beloved series in. I haven’t even replayed Knights of the Old Republic in a while now…

The only thing Star Wars related I have watched is The Mandalorian. And that’s because it’s being handled by people who actually give a damn about this property. Looking forward to season 2 in October!

That MIKE ZEROH guy posts a lot of these kinds of videos @legaiaflame. From what I can tell, he has zero credibility. These clickbait videos are very good at increasing views on YouTube and thus ad revenue for the creator.

That said, now would be that time to add some additional scenes to the sequel trilogy to add a degree of coherence. While the actors are a similar age and Ian McDiarmid is still alive.

No one can find the official source. It’s just pure rumors at the moment. Apparently, from people on the inside. There are no official statements or articles by Disney that I can find.

As far as I am concerned, the book sequel Thrawn series will always be cannon for me. These new films were trash from the moment they started. I do feel strongly about this yes. I just don’t get the need to retcon all that great material or force the original cast into a story that made what they did meaningless.

Well, that’s what happens when you go in with no plan what-so-ever and make shit up with each new movie/director.

That’s what happens when you have someone like Kathleen Kennedy pulling all of the strings with her political agenda that takes all precedence over any kind of meaningful story. As well as deleting countless important scenes from the story, that were vital to the narrative because it might outshine your female lead.

That’s what happens when you aren’t passionate about the subject material or its characters; completely disrespecting the franchise to get across your personal ideologies!

I in no way think there was a political agenda and I think having a strong female lead is awesome. I just wish they would have done their own story in the universe and left the original trilogy characters alone.

I’m fine with a strong female lead but it was handled completely wrong. They made Rey a mary sue, perfect in every way. She had no weakness, was good at everything and didn’t have to do barely any training. She had no growth or progression as a character. Can you relate to someone who is perfect and is given everything? Because that is not how a normal human being operates.

She had nothing to strive for nothing to learn or any goals to reach for. Basically, she didn’t earn anything. She was just perfect at everything she did with no effort on her end.

And Kathleen Kennedy had an agenda to push the original trilogy characters out of the movie, only to focus on Rey. So in the end: Luke had like 1 minute of screen time with no dialogue at the end of Episode 7, and was killed off in Episode 8. This might have been okay for Han as it was a story element for Kylo. But, Luke was too vital to underuse in Ep. 7 or to be thrown away so soon in Ep. 8 without having “seriously” trained Rey. It felt like a joke.

Then, we had no character development for Fin or Poe. With Episode 8 diverting any character progression they might have had in favor of a casino side story with Rose. So, in the end we go back to Rey and what did she accomplish? She was already all powerful. Luke didn’t have to train her. All she had to do at the end of Episode 9 was reflect Emperor Palpatine’s lightning right back at his face and that was it…LoL!

Also, Daisy Ridley confirmed herself that Disney had no coherent plan for the trilogy!

this isnt really news, they said as much in 2015 before episode 8 even came out

I dont really have issues with Kathleen Kennedy as an executive producer. She has a great history of making sure the “machine” of big blockbusters work. But she isnt a Creative Director, a Visionary- it is not what she ever did or even signed up to do. Kevin Feige was that for Marvel, they really needed that for Star Wars . You give the directors a sandbox to play in, but you define the goals and where they need to end and where they need to head and how the character need to arc. 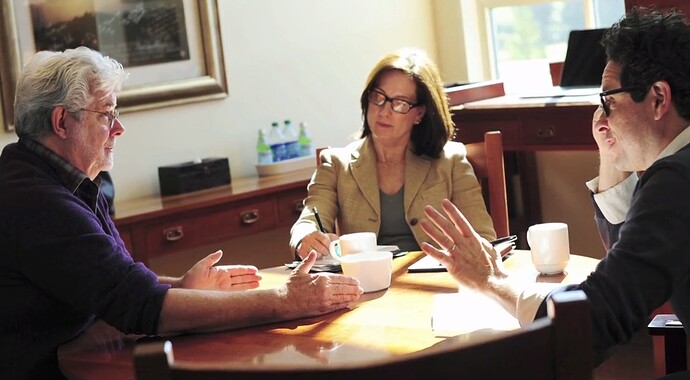 In a barrage of new information on Star Wars, new quotes from Kathleen Kennedy and JJ Abrams focus on mapping Star Wars Episode 8 and Episode 9.

But as the second film in a trilogy, how much freedom does he have? Kennedy explains:

> “We know where we’re going, but only in the broadest sense. When Rian came in and started writing his script, he started from scratch, other than knowing what we had done in Episode VII and projecting out where it was going. He then sat down and put pen to paper, and it’s 100 percent him.”

So it sounds like maybe Lucasfilm isn’t being quite as strict with controlling their filmmakers as their Disney neighbors at Marvel Studios, and that’s some very encouraging news. Abrams added that, “It’s a thrill to see [Johnson] take things and elevate them beyond what we had imagined at the time.”

They should have stuck to whatever plan the first movie was going in or actually planned out the entire story to its completion, before filming even took place on Ep. 7. She, and everyone else took things in the wrong direction. A direction that was miss planned and turned into a disorganized mess!