Has anyone played/heard of this game? A lot of people compare it to the TellTale games in terms of gameplay, but I haven’t played those. I did find it quite similar to Dreamfall Chapters. Ultimately they’re all variations on the old click&point adventure games: very heavy on narrative and with little to no “action”. There’s not much in the way of puzzles to solve though, the focus is mostly on the dialogue choices. What’s unique about the game is that the main character can rewind time, letting you to alter your actions or dialogue choices. And many of those will have consequences later on in the story. I played the first chapter (there are five planned in total), and I quite liked that mechanic, as well as the story and characters. I often found myself doubting which decision to take since it’s not always obvious what the right choice is. Here’s the launch trailer: 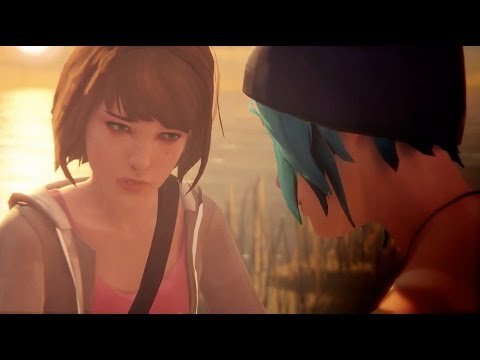 This game looks interesting. The acting appears to be high quality. I’ve added it to my Steam wishlist.

This game has really caught my attention for various reasons. It’s far from a perfect game, but you can really see that a lot of love went into creating it. They really created such a great setting, and the art style and lighting really evokes that melancholic atmosphere they were aiming for. The characters also feel real because they’re all flawed. Max, the main character, isn’t a typical hero protagonist. In the first ten minutes, the game establishes her an introvert (in a rather clever way), which already sets her apart from video game protagonists. There’s a lot going on in the story (among other things, the butterfly effect is an important plot arc in the story, and there’s also a Twin Peaks-like mystery concerning a student who disappeared a few months ago without any trace), but the core of the story revolves around all these characters trying to find their way in life. Also, I haven’t really had this much fun coming up with theories about a game since, well, Panzer Dragoon.

There’s certainly a chance that it’ll all fall apart in the end, but at the moment this has the potential to become one of the best games I’ve ever played.

Well, I played Episode 4 now, and they certainly delivered what people were expecting. Life is Strange deals with some heavy, dark themes, but it’s handled in a good way. The reason it works, and why people get so emotionally invested in this game, is simply because a lot of what happens feels like it’s grounded in reality. I can’t really compare it to any other game in that regard. The latest episode was the biggest one in terms of emotional impact, for various reasons. Explaining that would be spoiling the story though, and this is one game where you really need to avoid spoilers. A lot of answers were given, but a lot of questions remain as well. Can’t wait for the final episode, I hope it concludes on a high note.

Thanks for the mini review @Draikin. I do intend to play Life is Strange at some stage (after I’ve finished with the PS3).

The good news is that it’s available on a lot of different platforms (PS3, PS4, Xbox 360, Xbox One, PC). What platform would you play it on? The PC version is the best graphically, it’s also the only one capable of 60fps. That said, the game doesn’t look drastically different on any platform. It think each platform also has a demo of the game available (a rarity these days).

What platform would you play it on? The PC version is the best graphically, it’s also the only one capable of 60fps.

Apologies, I thought I had replied to this already. To answer your question, I would play it on PC. I’m surprised to hear that the PS4/Xbox One versions aren’t 60fps.

The final episode will be released in less than 24 hours from now. For a choice-based game, a lot will depend on the ending(s) and I really hope we don’t get another Mass Effect 3. I don’t care if there aren’t a lot of different endings, I just want it to make sense and end the story in a meaningful way. The game got more and more attention over the past year so I’m certainly not the only one who’s eager to find out how it all ends.

Solo, I’d advise you to try and avoid reading anything about the game until you play it. There are some massive spoilers out there that are difficult to avoid, especially on forums and social media.

Well. I tend to be rather critical when it comes to a game’s ending(s) and Life is Strange is no exception. There’s a lot I could say about it but the problem is that I can’t really discuss anything without giving things away. But overall, it’s really a game that should be played by anyone that likes character-driven games. I’m not sure how others will look at the game, but I find it to be rather unique, even in its genre.

I played through the whole season of Life is Strange over the weekend, starting on Friday night with episode 1, then episode 2 and part of 3 on Saturday, and the rest of the game on Sunday. Evidently, I enjoyed the experience.

Often I don’t feel engaged with the characters and world of a video game; there’s often a lot detail to wade through beyond the protagonist’s personal story that can make exploring a game universe feel like a chore at times. For example, in Shenmue and Mass Effect, there’s a lot of detail, but much of that detail isn’t personal, it’s about portraying a larger universe that the characters have been thrust into. That’s not always a bad thing, but too much of it can take away from a tightly focused story.

Life is Strange is not one of those games - it’s more like Panzer Dragoon Saga in that the respect, the game universe and the characters in it nearly all feel connected to Max’s life in some way. The locations are minimal as well, with not much space to explore, but there’s depth to them. It does indeed feel grounded in reality. The small parts of the world that are explorable feel lived in. Even though there’s also a science fiction element, it is for the most part used to further enhance the story and characters rather than just being there as a cool gameplay mechanic. I felt really engrossed in the story, continually wanting to see what happens next - that’s not something that I can say about most video game stories.

Although Life is Strange is primarily a story based game, there is some gameplay here, mainly in the form of examining environments with minor interactions, responding to multiple choice conversations (which actually effect later parts of the story), and a great time travel mechanic. There are no combat mechanics and no quick time events, which I am thankful for (indeed, the fact that Life is Strange works so well without QTEs proves, to me, that modern games don’t need QTEs to tell cinematic stories).

It’s essentially a “choose your own adventure” game. I haven’t played the Telltale games either (I intend to try them), but from what I hear the consequences of your actions are further reaching in Life is Strange. For example, a choice that I made in episode 1 (which I didn’t think much of at the time) had a ripple effect throughout the game and ended up changing a character’s actions in episode 4. There seems to be many small variations to the story like this, although I’ll need to replay the game to really see how many big variations to the story there are. That brings me to the ending:

I was also disappointed with the ending. Much of the last episode felt a bit disconnected from the strong sense of a consistent reality presented in episodes 1 - 4. Perhaps I’ll pick up more detail from a second play through, but it seems that we didn’t learn much more about the mysterious events relating to the tornado and the origins of max’s ability, we just saw more effects. Yet we’re asked to believe that there could only be two choices in the end, without an in-depth explanation as to why. This seems contrived, given that we’re presented with many alternative choices for other events earlier in the game.

The ending aside, I’m very pleased to have played through Life is Strange. Thanks for recommending it @Draikin. I’m looking forward to hearing more about the potential sequel.

Good to hear you liked the game! I wonder how different the experience is when you play it in such a short time span. I played it right from the first episode, and it gave me a lot of time to come up with theories. I somehow spent over 50 hours on the game in total.

A few questions for you, if you don’t mind:

Playing all of the episodes within a weekend felt like reading a good book, or binge-watching a TV series. No complaints, but I guess I missed out on the fun of coming up with theories between episodes.

To answer your spoilery questions: