What do you all think of the Halo Infinite footage?

Personally I didn’t get too excited by it. It was nice to see a Halo ring though, and the prospect of an open world area in the Halo game is interesting.

I thought it looked and sounded… Off. The natural stuff like grass and trees looks all right but anything man made or alien made has this god awful plastic sheen over it (including the aliens themselves!) and there’s just a shocking lack of detail

I just hope they nail the gameplay. I’m hoping that it looks and sounds so basic because resource has been put into content and fine tuning instead…

Art direction is bad. Gunplay seems as eh as ever (could never get into it myself, trying with the MCC atm).

So Halo Infinite has a Steam page now. I thought that maybe MCC would be on Steam, with Infinite exclusive to the Microsoft Store, but it looks like they’re extending these Steam releases to new games too (which is great).

That leaves the question of: when is Halo 5 coming to PC? It seems odd to release the sixth game before the fifth one. Perhaps it will be added to MCC?

Hopefully the average visuals in Halo
Infinite will mean this game runs at 4K/60fps without having to pay through the roof for a high end GPU.

Sea of Thieves was on Steam too, that wasn’t as old as the MCC. They put MS FS on Steam. I’m pretty sure they’ve announced that’s their strategy, doing away with MS Store PC exclusivity (as well as any console exclusivity) so that moving forward everything will be on Steam too (until they change mind lol).

I am really glad that Microsoft started allowing their games to be sold on Steam. I probably would not have picked up MCC if it wasn’t for that.

I havn’t bought a console since the Xbox 360, but am considering picking up a Series X or Series S when they are released. Partially because I need a good Blu-Ray player for my basement setup, but also because it is fully backward compatible and all my games are able to be played with improved graphics on the new console.

As for Halo Infinite, I actually really liked what I saw. The best part of Halo is the run and gun, especially co-op for me. I really like the idea of it being open world and being able to explore an entire Halo Ring. Also they have confirmed multiplayer won’t require an Xbox Live subscription. The paid subscription is what led me to stick with PC games for the most part, so having the option to play on the console without charges is an exciting prospect. Graphically I am sure that it will improve before release as this was a beta demo. The devs have also committed to improving the game post release based on feedback. I think the goal is for this game to continue to serve as a long term single/multiplayer project with new content throughout the years.

So it’s just been announced that the game has been delayed until 2021, which comes as no surprise really. But there’s the question of what will people buy on Series X this year. 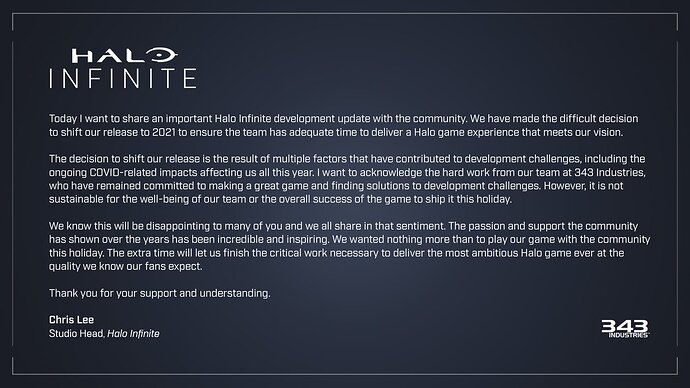 This is good news. Perhaps it can be turned into a next gen game now…

That leaves the question of: when is Halo 5 coming to PC? It seems odd to release the sixth game before the fifth one. Perhaps it will be added to MCC?

Well this is disappointing… 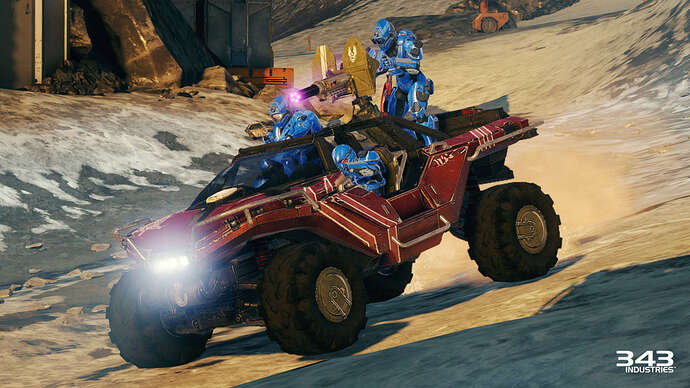 Microsoft Has No Plans To Bring Halo 5 To PC

And Microsoft isn't planning to add it to The Master Chief Collection, either.

They might still add it to the MCC eventually, but it’s unfortunate that this is not in the pipeline at the moment. To experience the complete Halo story, PC gamers who have played Halo 1-4 in the MCC still have to play Halo 5 on an Xbox console before returning to PC to play Infinite.

The character models look like Xbox 360 quality. When we have the facial animation technology used in games like the Uncharted series, I see no excuse for this in next gen. The gameplay looks okay I guess, but not the graphics…

They might still add it to the MCC eventually, but it’s unfortunate that this is not in the pipeline at the moment. To experience the complete Halo story, PC gamers who have played Halo 1-4 in the MCC still have to play Halo 5 on an Xbox console before returning to PC to play Infinite.

Yeah this is dumb. I’m sure it will come to PC eventually, but I suppose they’re focusing on Infinite now and it’s only right they sort that mess out before trying to ship something else.