GOG Galaxy 2.0 - "all your games and friends in one place" 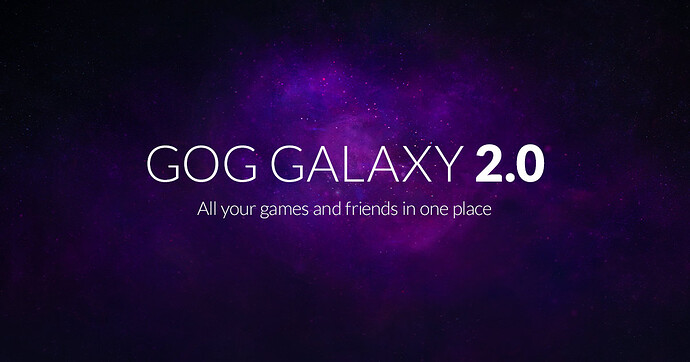 GOG GALAXY 2.0 - All your games and friends in one place.

Connect GOG GALAXY 2.0 with other gaming platforms and bring together games you play and the friends you play them with in one powerful app. With GOG GALAXY 2.0 you won't have to juggle between multiple clients to access your games and see what your...

I’ve been saying for a while that Microsoft should add some sort of universal game library launcher/manager to Windows, but if a third party is the one to implement it, so be it.

It sounds like we’ll still need the different clients installed for updating games, cloud saves, etc, but as a first step this sounds promising. The execution will determine whether it is something that gamers will want to use as their main PC game launcher over Steam.

I installed the beta of GOG Galaxy 2.0 and connected all of my gaming accounts: 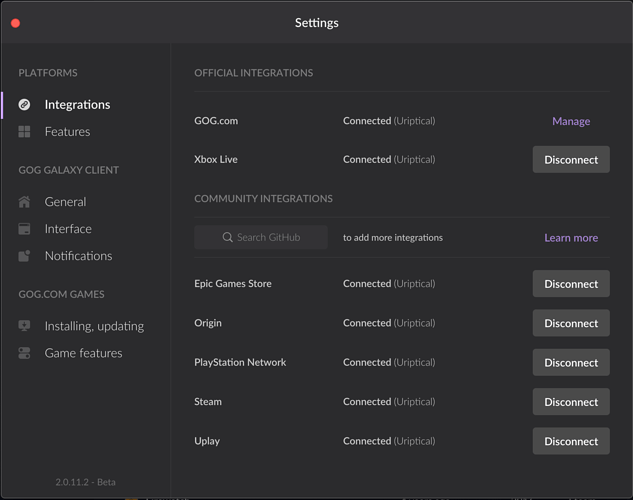 The majority of my games are in these accounts. The only major absences here are Nintendo and iOS.

This created a massive master list of all my games. It’s really cool to see Shadow of the Colossus, Crimson Dragon, and all my PC games in the same list. It isn’t quite perfect - for example, any physical PS4 games that I’ve played are included, even for those which I no longer own the disc. And Original Xbox/Xbox 360/PS3 games don’t show up at all (I’m hopeful they’ll at least include Xbox 360 games in the future since many of them are compatible with later consoles). 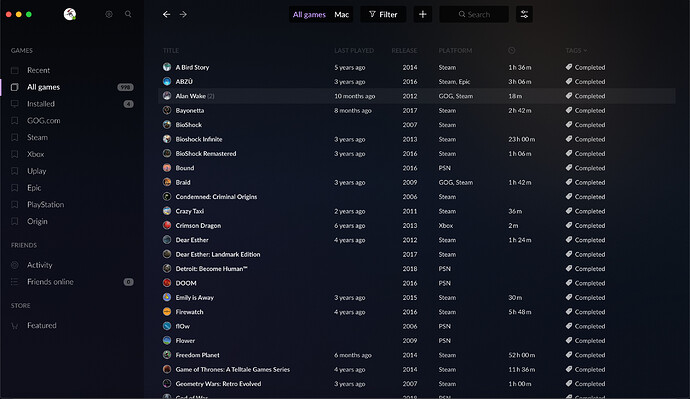 You can add custom tags to organise your games. I added the “Completed” tag myself. So far I’ve completed 71/998 games.

I was able to install a Steam game by clicking on the install button in Galaxy client (it just opens up Steam which was already installed my machine). There doesn’t seem to be any way to share the lists at the moment and the client is a little slow, but overall I’m really happy with the way I’ve been able to manage most of my games through the one application.

While I like the idea of this and I have linked all my accounts on this new client, it isn’t necessarily making my life any easier. I never care about achievements, so this linking really just ends up being a slightly easier way to pick what game I want to play next. I have gone back and forth on whether I really want to continue with the link feature.

It’s nice having a master list of all my games that I can then order and organise into lists, e.g. completed, alphabetical, year released, etc. To make a comparison, I find it useful to use an app like iTunes to organise my music, which comes from a range of different sources; it’s possible to just launch MP3s from a folder, but it’s less convenient since there’s only one way of organising the songs (hierarchically).